The Bramble casseroles came in two colors: beige and green. 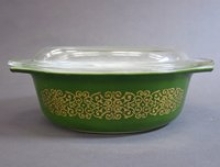