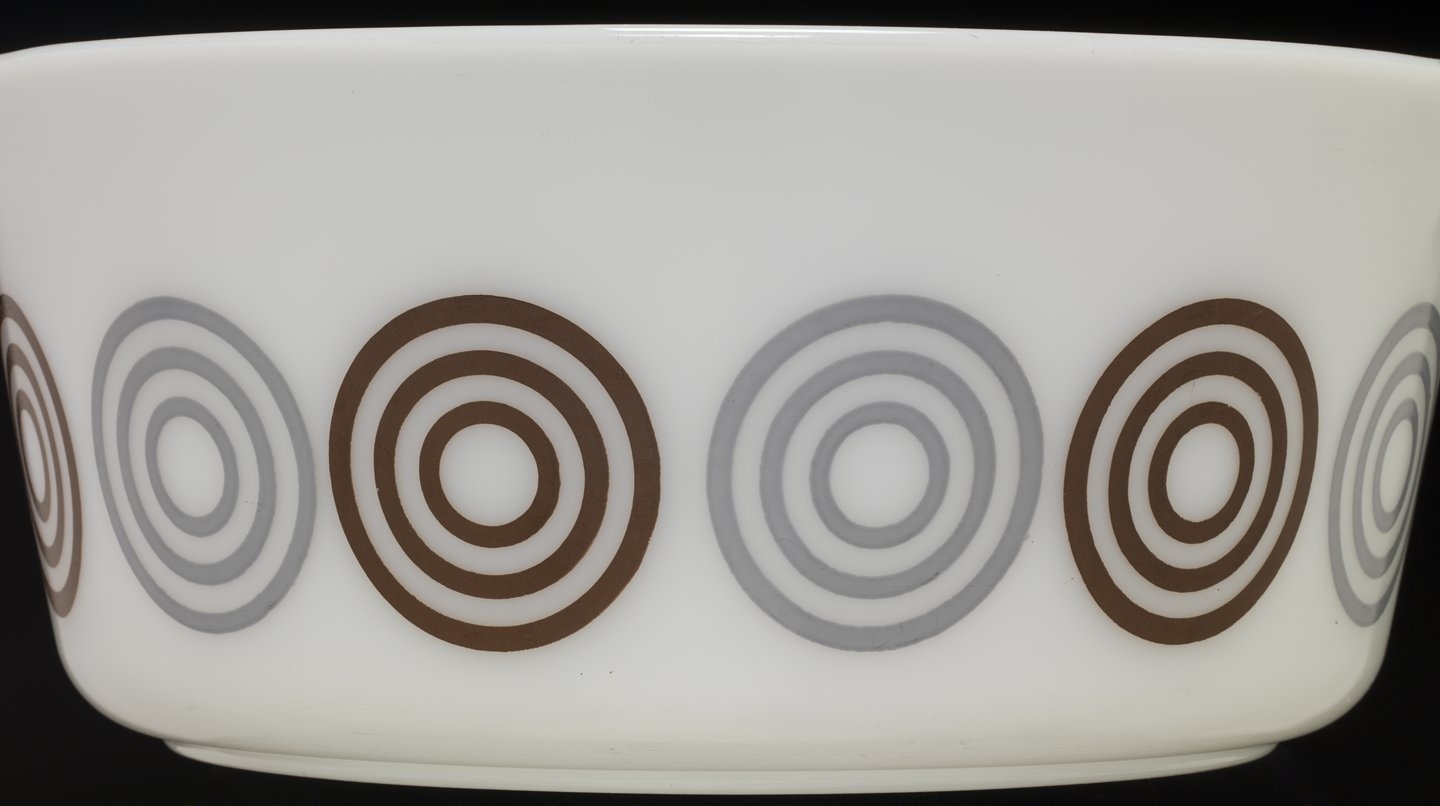 Cosmopolitan is one of the most unique Pyrex promotional patterns because of its production method. Released in 1973, Cosmopolitan was a collaborative project between Corning and its subsidiary Salton, Inc.

Salton was acquired by Corning at the end of 1970 and the company specialized in the manufacture of “various small, electric household appliances, principally for keeping food warm after preparation.” While Salton Inc. was owned by Corning Glass Works, founding chairman, Lewis L. Salton, ran the company autonomously and made all marketing and business decisions.

In 1972 Salton Inc. set sales records with the introduction of a yogurt maker and a pizza warmer. In early-1973 Salton Inc. released the new Cosmopolitan Hot Casserole Set, which combined the products of both Corning Glass Works and Salton Inc.

The Casserole is white opal ware Pyrex with a design of alternating brown concentric circles and gray concentric circles. The lid is brown opal ware and has a design of white concentric Circles on top. The casserole is the 2 ½ quart (475) Pyrex model. The set also included a square electric hotplate designed to match the Cosmopolitan design. The hotplate has brown edges and handles and a silver center with a white spiral bullseye design.

Unlike the Pyrex produced exclusively by Corning Glass Works, the Cosmopolitan Casserole dish is either stamped on the bottom with the word “Pyrex” or with the word “Salton.” As far as the records indicate, Salton Inc. was responsible for both the marketing and distribution of the Cosmopolitan Casserole and was always sold with the Salton hotplate and was not available for purchase in open stock. However, by the end of 1973 Corning Glass Works sold Salton Inc. back to its original founder, Lewis Salton because “realities of the marketplace dictated that the best future direction for both companies would be to progress separately” (The Gaffer, October 1973). It remains a mystery as to why some Cosmopolitan Casseroles are stamped with “Salton,” while others say “Pyrex.”

After its division from Corning Glass Works, Salton Inc. continued to produce various home appliances under the “Cosmopolitan” collection name.

Often, patterns used for these gift items were unnamed, or given names descriptiveof the dish’s purpose, like “chip and dip set.” Collectors over the years have assigned names more reflective of the specific pattern.