Foulard was never advertised in magazines such as Better Homes and Gardens or Ladies Home Journal.
Primarily found in Beverage Sets, Foulard also exists as a small cereal bowl.

While Foulard was never advertised in national ad campaigns as a retail product it can be found in three different colors; Gold Foulard and Blue Foulard, either in navy blue or light blue.

Primarily found as a beverage set, Foulard also exists on small cereal bowls. The beverage set came with an 8-cup carafe with candlewarmer and four 10oz mugs and was priced at $6.95.

The Gold Foulard and Blue Foulard beverage sets are depicted alongside the Early American beverage set in a 1965 dealer catalog. However, there were never any advertisements in magazines such as Ladies Home Journal or Better Homes and Gardens containing Foulard. This may have been because Foulard was a limited release meant as a market test piece since it only appears in dealer catalogs.

One of the more obscure Pyrex patterns, Foulard has a series of either eight-pointed or four-pointed stars alternating in an all-over pattern on the mug, carafe, and bowl. 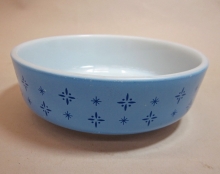