When Friendship first appeared in 1971 it was accompanied by a full array of items, including Mixing Bowl sets (400 &300), a Cinderella Bowl set (441-44), and Refrigerator set (501-03), Round Casserole set (471-475), and a range of Bake Ware products. The nesting bowl sets contained a solid orange, a solid red and two different size bowls with the Friendship pattern on a white background.

Around 1972, clear patterned lids were replaced with opal lids with the same design. A favorite pattern among collectors, Friendship is evocative of rural Pennsylvania Dutch designs. Interestingly, in 1971 a promotional pattern called “Penn Dutch” was released with a denser arrangement of the bright orange and red bird motif of Friendship. 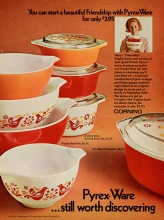