Golden Rose came with a dual candle warmer and retailed for $6.95.

Golden Rose was released in late-1967 on the 2 ½ quart Oval Decorator Casserole (045). The beige dish has a golden rosette and swirl design and came with a cradle and dual candle warmer. 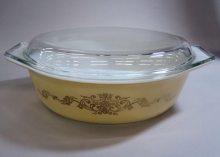