“Whatever the occasion, it’s always right to give PYREX Ware!” exclaims a 1969 “New Gifts” catalog. One of these new gifts was the unofficially named “Golden Rosette” pattern.

Golden Rosette was referred to as an Oval Casserole with Candle warmer, but did not have an official pattern name. Released on the 1 ½ quart Oval Casserole (043), Golden Rosette has a central golden rose design with flowery vines spiraling outward on a light yellow background.

Upon its release, Golden Rosette retailed for $4.95. 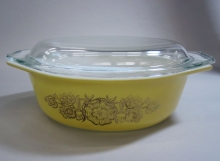