Philip Johnson
Gooseberry, along with Butterprint, was the first pattern released on the new Cinderella Mixing Bowl set.
Gooseberry was one of the first four printed patterns release on opal Pyrex.
Gooseberry was released in several color iterations, consisting of pink on white, white on pink, black on yellow, black on white, and a promotional version of gold on beige. 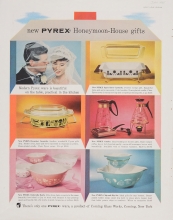