Available to the consumer market in late 1971, Kim Chee has a beige background with a stylized floral and swirl design on both the casserole dish and the matching beige opalware lid.

Kim Chee debuted on the 1 ½ quart Oval Casserole (043) and came with a serving cradle. Casserole and cradle retailed for $4.95 upon its release. 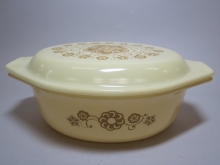